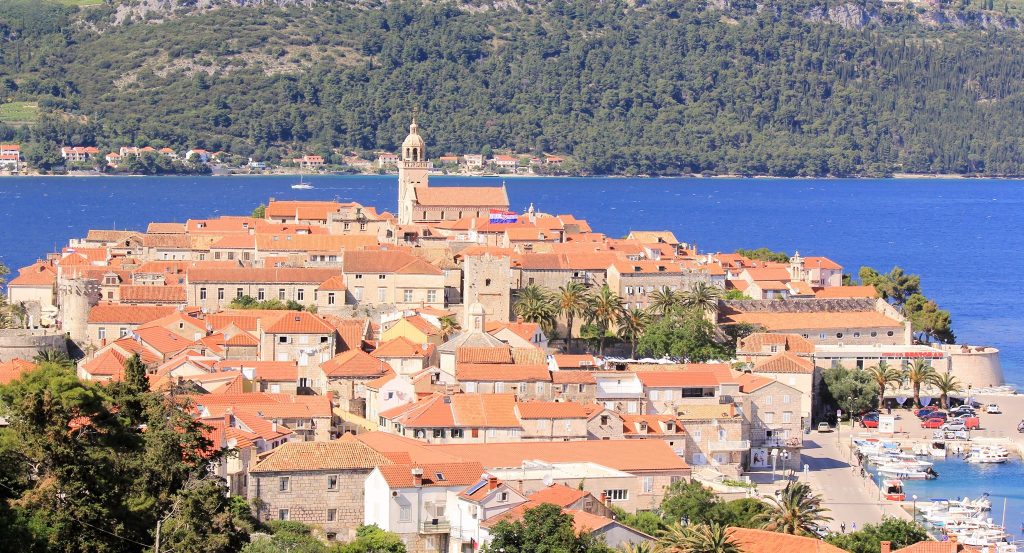 If you are looking for a wonderful vacation spot that is full of history and natural beauty then the historic town of Korčula is the one for you. Located on the east coast of the Korčula Island in Croatia, this is a fortified town with a population of about 3000 inhabitants. Korčula is a popular spot for tourists and the Korčula Old Town, a medieval walled town, is one the main attraction as it contains all the sight-seeing spots from towers, galleries, restaurants, monuments and open-air cinema.

The beautiful structure of Korčula

An old city, Korčula is surrounded by walls with the street designed in a way that allows free circulation of air but protects against strong winds. Until the 18th century, building outside the wall was forbidden and it was only in 1863 that the wooden bridge was replaced. All the narrow streets in Korcula are stepped except for the street that runs alongside the southeastern wall. This street is called the Street of Thoughts as one did have to think about the steps.

There is a weapons dance called the Moreška which goes back to the Middle Ages that is a part of their culture as well. It was initially only performed on special occasions but it now it is performed twice a week for the tourists. Korčula has a Croatian culture that came from the late Roman era. The small island has a Mediterranean cultural personality which is different from continental Croatia up north. There is a local legend in Korcula that Marco Polo was born there in 1254, with his alleged house of birth open to visitors. The house in itself is nothing remarkable but the houses’ towers offer a beautiful panoramic view of Korčula. The house is currently under the protection of the Korčula Town Hall which plans to turn the house into the Museum of Marco Polo.

Seeing as it is a historic town, the Korčula Town Museum is definitely worth a visit as it displays the Korčula stone carving, artifacts from Ancient Greece and Lumbarda Psephism, Carvings and Coats of Arms Exhibits from Renaissance and historical shipbuilding items. The town has historic sites like the Franciscan monastery with its beautiful Venetian Gothic cloister from the 15th century, the Cathedral of St.Mark with its distinct Romanesque-Gothic features, massive city fortifications and the grand palaces of the local merchant nobles from the 15th and 16th century and the chambers of the civil members.

These are the main sites in Korčula Town:
Plokata – one of the main squares
Riva – the port
Punta Jurana – a stretch of area that has cafes and restaurants
Rotonda – fresh fruit and vegetable market
Forteca – an English tower built in 1813
Hober – a big park located within the town.